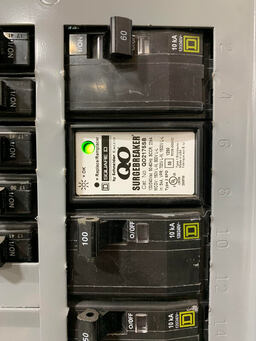 The national electrical code updates every three years. One new requirement coming in 2020 is that surge protection will be required in all new dwelling units. For the last couple of years, CWC Electric, LLC has been including basic surge protection when performing panel replacements. We use Square D panels and include the cost of a whole home surge protection device (Square D HOM250PSPD) in every estimate we provide to our customers. These devices plug where a circuit breaker would go and offer basic protection.

Where do surges come from and why is surge protection needed?

Power surges can originate from a variety of sources. They may come from the electric utility during power grid switching or weather events such as wind, lightning or solar flares. But most commonly , they come from inside your home. 80% of residential surges are created by such equipment as air conditioners, power tools, pumps, appliance motors and garage door openers turning off and on. Most surges occur when devices with motors turn off. Suddenly, the energy that was being consumed needs to be diverted elsewhere in the form of excess voltage.

In the past, you may have purchased a surge plug strip attempting to protect your computer or television. Yet homes today contain an average of over $15,000 worth of unprotected equipment. A surge protection strip only offers limited protection to the items which are plugged into it. Besides computers and televisions, your home likely contains refrigerators, an air conditioner, washer and dryer, electric range, dishwasher, gaming systems, freezer, microwave, stereo, DVR and maybe even an electric car. When surge protection is installed at the electrical panel, it helps protect all the devices in the home, including those that are not plugged into  a surge plug strip. It has been estimated that the average home receives over 100 surges per month.

Most homes use electrical power in the form of 120 volt, 60 hertz, single phase, alternating current. Your electricity is not delivered at a constant 120 volts, rather the voltage rises and falls in a predetermined rhythm (60 hertz) from 0 to a peak of 169 volts. During a power surge, the voltage exceeds the peak voltage of 169 volts that most electronic devices have been designed to withstand.

Spikes in voltage harm appliances and electrical devices. The increased voltage above a manufacturer's designated voltage creates an arc within the device which generates heat. This heat damages electronic circuit boards and other electrical components. Even small, repeated surges slowly damage your television, computer or other devices, significantly shortening their life span. 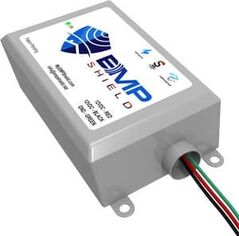 While our company installs basic surge protection when replacing electrical panels, we recommend upgrading to a more robust electrical surge arrestor such as EMP Shield, especially in applications. While most surge protectors are basically one-and-done in the event of a large surge such as a close lightning strike, this product is built to exceed military standards and can handle larger, multiple surges over time. It also reacts much more quickly than the typical surge protector to shunt over voltage away from equipment.

If you own or manage a business that operates expensive equipment or stores a lot of irreplaceable data on your computer network, it is highly recommended that a product such as EMP Shield be installed as part of your electrical safety equipment.